Hulley and Kirkwood are delighted to have been involved in the £3m Watergate Bay Hotel project in Newquay, which has recently won a 2013 RICS Award South West & Wales Award for outstanding contribution to Tourism and Leisure. 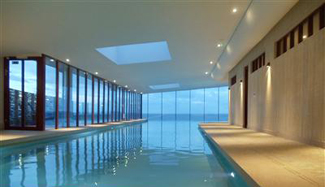 We were appointed by the Watergate Bay Hotel via Ease Developments to provide M&E designs for the new health spa, swimming pool and reconfigured entrance. Key design features included integration into the existing facility, provision of a 25m infinity pool and the combination of CHP and solar thermal panels to provide heat to the pool, which will operate in an enclosed and open format.

During the construction H&K were provided with a further appointment to provide a new wedding venue and commercial kitchen.