Project of the Year Winner 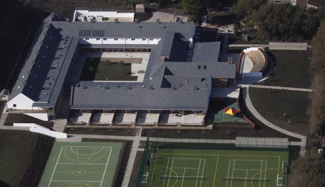 Hulley and Kirkwood were appointed by Kier Construction to provide M&E Design Services for the new Five Islands School serving all ages from 3 to 16 years old. The new building includes nursery, primary and secondary class bases and provides specialist teaching areas for design and technology, science and performing arts, as well as a library, cafe and a new multi-use games area.

Set on St Mary's in the Isles of Scilly, the provision of the United Kingdom's first through school is the largest construction project on the Islands in living memory.

The project was made all the more challenging by the logistics of construction on the Islands and the adverse environment utilises natural and mixed mode ventilation strategies, underfloor heating linked to air source heat pumps and solar thermal panels to provide hot water generation. Completed at the end of the Summer 2011 and followed by the sports hall and modifications to the adjacent Carn Gwaval Primary School in December 2011, the school was formally opened by HM the Queen in June 2011.

“It was a very public acknowledgement of the skill, dedication and lateral thinking employed by our team.”