Fireworks on the Water 2014

Hulley and Kirkwood Plymouth celebrated another successful year with their ‘Fireworks on the Water’ event on 12 August 2014.  The clouds parted and rain ceased just in time for us to set sail around Plymouth Sound and Tamar Estuary for a two-hour cruise before settling to watch the first of two nights at the British Fireworks Competition.   We were lucky enough to have seen the winning display of the competition this year! A team picked out by most of our on-board judges! 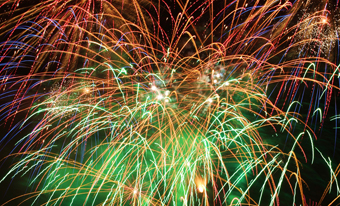 The crew and the caterers did an exceptional job on the water and back on land, and the fireworks were spectacular as always.

Many guests stayed on later than they had intended, and some into the early hours of the next morning…needless to say there were a few headaches the next day – some are yet to be found!  We received some fantastic feedback from our clients, many of whom said they await our invitation each year to the ‘event of the year’ in the construction industry, Devon and Cornwall.

We would like to say a big thank you to everyone who attended and made the event such a great success and without whom we wouldn’t be here.  Here’s looking forward to the next year!