H&K are very pleased to be part of the Glasgow Learning Quarter (GLQ) Consortium working on the massive City of Glasgow College Campus project. 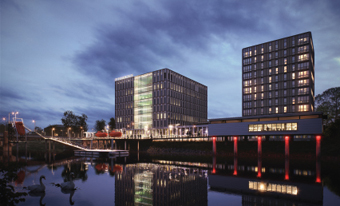 We are very pleased to announce that the Riverside Campus officially opened its doors on Monday 17th August 2015, an achievement in itself, with this milestone being reached under an extremely tight programme.

Staff and students will now be able to take advantage of their new facilities at this new £50m section of the overall development which includes a specialist nautical college, engineering workshops and a halls of residence for 180 students.

Construction began on the new £228m campus in the summer of 2013, where state of the art buildings are being created on existing college land at Cathedral Street and on the banks of the River Clyde.

Focus now shifts to the City Campus at Cathedral Street which should be complete by August 2016.