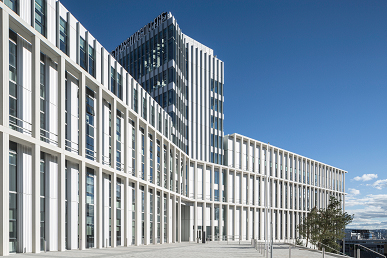 Hulley and Kirkwood were the MEP designers and BREEAM assessors for the Glasgow Learning Quarter consortium led by Sir Robert McAlpine Ltd/FES Holdings Ltd for the City of Glasgow College’s new £228m campus development project.  The Reiach and Hall and Michael Laird Architects designed campuses, one at Cathedral Street (City Campus) and one at the Riverside Campus at Thistle Street caters for 40,000 students.

The Cathedral Street building features a suite of art & design studios, a multi-level, open plan library and a range of catering outlets including a rooftop cafe.  It also has its own TV and radio broadcast facilities. The City Campus scheme supports the Faculty of Leisure and Lifestyle, integral to which is teaching areas of fitness, sport coaching and sports therapy.
Both sites were successfully completed on time and within budget with the Riverside Campus opening to Staff and Students in August 2015 and the City Campus, August 2016.