The £26m University of Dundee Centre for Translational and Interdisciplinary Research (CTIR) is an annexe to the existing College of Life Sciences Welcome Trust building which was constructed in July 2012 and completed in June 2014.  The building now known as the "Discovery Centre" consists of four storeys of laboratories and associated office space, including state-of-the-art drug discovery high throughput screening laboratory and quantitative proteomics and proteomics data analytics facility, with an open-plan floor dedicated to interdisciplinary research bringing experimentalists into juxtaposition with computational biologists, biophysicists and software developers. 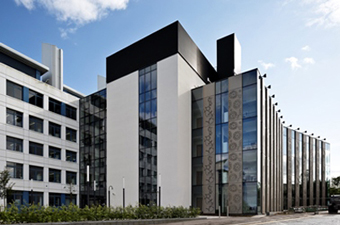 One of the key aspirations of the facility is to enable innovation by breaking down barriers between scientific disciplines. To facilitate this, an enclosed ‘street’ is formed between the CTIR and the existing Wellcome Trust building. This space acts as a meeting and collaboration place, promoting science collaboration projects and streaming live data direct from the laboratories.

The Discovery Centre was opened by Sir Paul Nurse, who won a Nobel prize in 2001 for his work on cell growth and division and potential new cancer treatments.  Sir Paul, who is also president of the Royal Society of London said he was delighted to see the centre in action. He added...

“Life sciences research in Dundee has an international

to bring different disciplines together, each bringing expertise

to bear on aspects of larger, systems-level problems relating