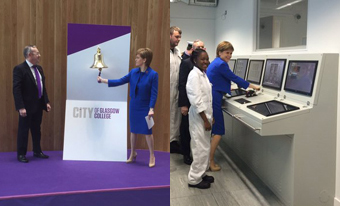 As well as nautical studies, teaching, catering and student accommodation facilities, Riverside Campus includes a marine engineering workshop featuring Scotland's first shipping simulation suite which will allow 10,000 students a year to experience operating at the bridge of a super tanker, utilising nautical chart rooms and running a ferry-sized ship's engine.  The Marine Skills Centre also has its own jetty and free-fall lifeboats.

Accompanied by College Principal Paul Little, Ms Sturgeon described the new facilities as "world class" before meeting with college staff and students during a tour of the campus.

The City Campus site at Cathedral Street in Glasgow, which is currently under construction, is due to be completed in the Summer.