Hulley & Kirkwood provided design input to the £500k privately funded Step Short Memorial Arch at Folkestone.  Opened by His Royal Highness Prince Henry of Wales in August 2014, the Arch, located at Leas in Folkestone, is the only new memorial to be built in commemoration of World War 1 and represents the role Folkestone played in the Great War.  Overlooking the harbour where ships departed for France, the stainless steel arch, at 14 metres high, spans the route where 10 million soldiers marched along the Leas.  Embedded within the arch itself, 100 LED lights, each one representing 100,000 soldiers to symbolise the contributions made by the UK and its allies from 1914-18. 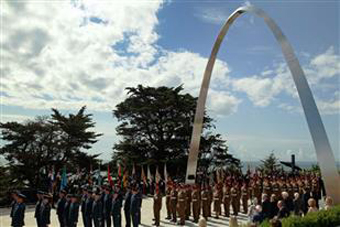 Given Hulley & Kirkwood's long standing involvement with the Ministry of Defence, it was an opportunity to support a project of such significance and we were delighted to design both the lighting scheme and supporting utilities.