Paul Cairns from H&K Manchester office completed the 2015 Marathon des Sables over 5th to 11th April. Described as 'The Toughest Footrace on Earth', it was a gruelling trek of 5½ marathons in 6 days across one of the world's most inhospitable climates, the Sahara Desert. 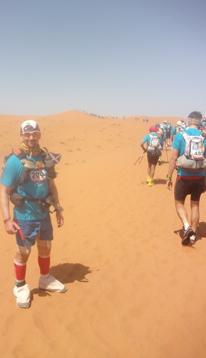 Paul trained for 7 months for this challenge, and his colleagues were frequently stunned with comments such as "well, last night I caught the train to Huddersfield and then ran home", a distance of roughly  26 miles!

During the 156 mile multi stage challenge, Paul not only had to endure the soaring temperatures (midday temperatures can reach 120 Fahrenheit), the challenges on running across uneven rocky ground and shifting sand, but also had to carry a backpack containing all his kit as the rules state that all participants must be 'self sufficient'.
Commenting on one of the most challenging parts of his adventure Paul said "collapsing after the long stage and waking up on a stretcher being carried to the medical tent was pretty low, my whole body had cramped because I hadn't taken in enough salt. Also long double marathon stage, there was a sandstorm around 1am, I was shattered and needed to eat and couldn't get my solid fuel stove to light, it took me 45 minutes before it finally fired - I still had 30k to go and almost had a sense of humour failure! However, as they say the depths make the heights even better. The third stage was great, I felt pretty strong and was able to appreciate the breathtaking scenery! That was the Jebel day where we had a couple of steep climbs; it was amazing helping each other up the vertical sand dunes on the Jebel, great sense of team spirit!”
Paul has raised £1500 for his chosen charities, Yorkhill Children's Charity and Royal Manchester Children's Hospital, but is still £500 off his target to give £1000 to each charity so if anyone would like to contribute you can still do so at http://uk.virginmoneygiving.com/PaulCairns2.
We are extremely proud of Paul's incredible accomplishment, and the fact that he returned back to the office, seemingly amazingly non the worse for wear!